The First Apology of Justin Martyr 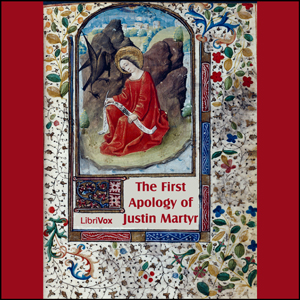 The First Apology of Justin Martyr

The purpose of the Apology is to prove to the emperors, renowned as upright and philosophical men, the injustice of the persecution of the Christians, who are the representatives of true philosophy … Christians are the true worshipers of God, the Creator of all things; they offer him the only sacrifices worthy of him, those of prayer and thanksgiving, and are taught by his Son, to whom they assign a place next in honor to him. This teaching leads them to perfect morality, as shown in their teacher's words and their own lives, and founded on their belief in the resurrection.
(Summary from Wikipedia)

If Justin Martyr were alive and walking among us as some other man, disseminating his Apology in his unapologetic temper, our leaders of seminaries and churches would dismiss him as an easily offended fanatic who shoots his mouth off. We are need of some Justin Martyrs today. Since the verses that are quoted, interpreted, and applied by Justin Martyr may be easily gathered together in a list, his First Apology would make excellent material for use in a Bible study.

This reading of the apology is so fluid as to be inconspicuous, which makes it easy to concentrate on what is read.

Uploaded by librivoxbooks on October 20, 2008